What does a historical consultant actually do? Perhaps the easiest way to answer that is to explain what clients have asked me to do.

​I've been working with Rochester Cathedral since 2013 as a medieval manuscript specialist for its Heritage Lottery Funded project 'Hidden Treasures, Fresh Expressions', focusing on a permanent exhibition of Textus Roffensis, the cathedral's most important medieval book, a manuscript which has been recognised as Britainls greatest hidden treasure.

As well as transcribing and translating, to date, about a third of its more than 450 pages, I've collaborated with a team in producing multi-media outputs for the renovated exhibition space in the cathedral's crypt, which opened in 2016. 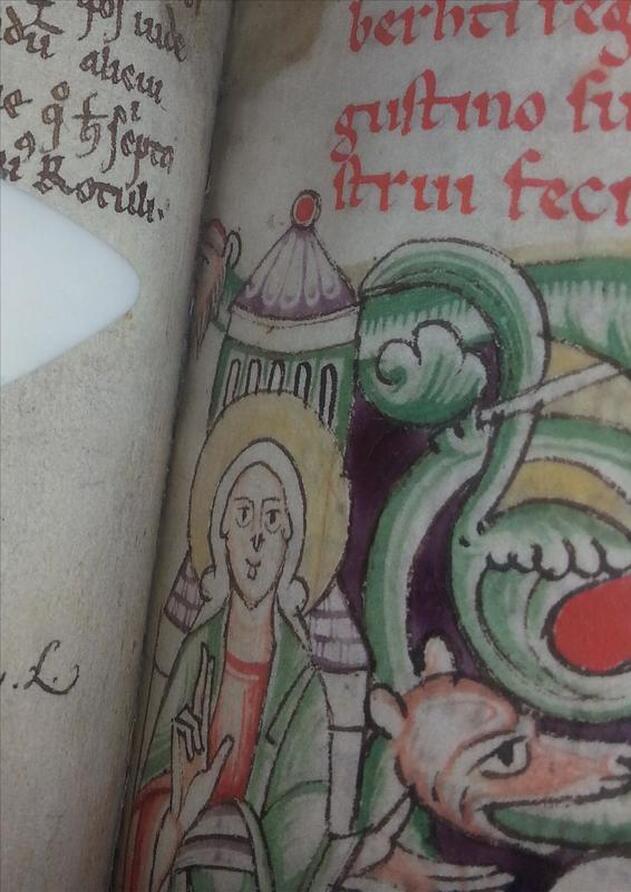 Textus Roffensis (Rochester, c.1123), close-up of folio 119r. Britain's greatest hidden treasure is being brought into the light. Image: Image by Christopher Monk ©2014 and by permission of the Dean and Chapter of Rochester Cathedral.
It requires a comprehensive skills set and great teamwork to make a medieval book with hundreds of pages of 12th-century script accessible to the general public. My job was to help the team understand what was actually in the codex, identifying and bringing to life its cultural and historical 'hotspots'. The result of our endeavours was an interactive, 'turn-the-pages', ​virtual Textus Roffensis and an educational film about the manuscript's scribe. ​​

"Our company, Fuzzy Duck Creative, was commissioned to create a number of touch-screen interactives explaining Textus Roffensis for Rochester Cathedral.  Chris was not only a modest but extremely thorough expert on how best to interpret this text for a modern and lay audience, but also recorded a friendly but authoritative voiceover for the interactives that exactly met the client's brief."
Phil Hewitt, Director, Fuzzy Duck Creative Ltd.​

Working on the 'Hidden Treasures' project has led to other work at Rochester Cathedral. I was commissioned to create an online guide to reading the Old English script of Textus Roffensis. And I've been digging into the lives of Rochester's medieval monks through a study of the cathedral's thirteenth-century customs book, known as Custumale Roffense. 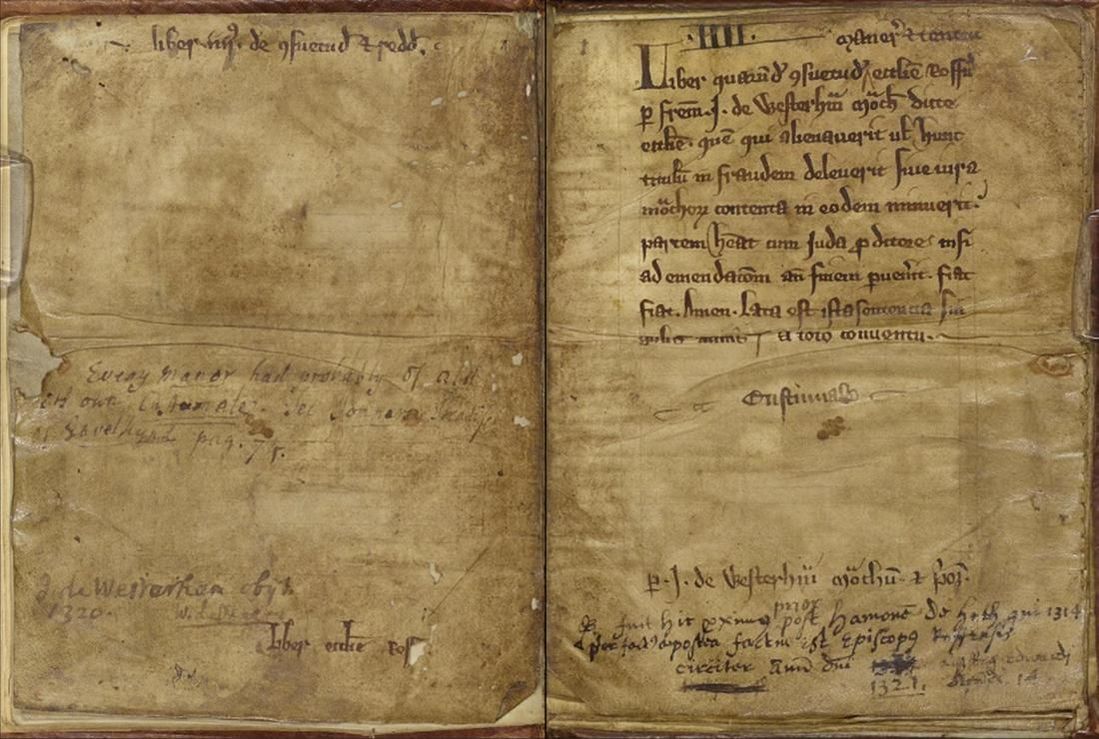 Rochester's thirteenth-century customs book, Custumale Roffense (folios 1v-2r), tells us about the fascinating lives of the Rochester monks and their servants. By permission of the Dean and Chapter of Rochester Cathedral.
One of my most enjoyable commissions for Rochester Cathedral was delivering a series of workshops for the cathedral's volunteers and library staff, followed by public lectures in the cathedral's nave.

​​"Christopher Monk was an excellent speaker, down to earth and approachable. He gave the great impression that he wanted to share his knowledge with us all. Great!"

​"The use of animated graphics to highlight individual words and sentences, and to see their modern English equivalent, made it easy to follow Dr Monk's exposition."

​"The sessions did meet my expectations; I've been fortunate enough to see Chris speak before so I know he is very good."

"Have more visits from Dr Monk."

"I do hope Dr Monk can be persuaded to come back often, and perhaps show us how to make pottage next time!"

Salix Games, headed by Bafta Breakthrough Brit winner Jessica Saunders, asked me to work as a historical researcher for its debut video game, Du Lac and Fey: Dance of Death. This meant providing well researched historical, art historical, and archaeological points of reference from which the artists could work in producing some of their fabulous artwork. The game is due for release in the summer of 2018.

"My Company Salix Games is making a video game that blends fantasy elements around real world events. We hired Chris to advise us on the early medieval period, so that we could establish a grounding for Arthurian Legend in 5th century Wales. This ranged from what these characters would have potentially worn to translations of spells into Old English.

Not only is he quick, but Christopher’s research is extensive and always goes above and beyond what we expect, often providing great ideas for us to enhance our characters and story by weaving in a layer of historical authenticity. To top it off he is an absolute joy to work with!"

The Salariya Book Company, an independent publisher of children's literature, asked me to work as historical consultant for one of its books in its flagship multi-million selling series,​You Wouldn't Want To. ​This was a great role for me, not only because I was able to advise on the historical accuracy of both the artwork and text of the book, but also because this kind of book fundamentally represents what my consultancy work stands for: educating ​whilst entertaining.​ 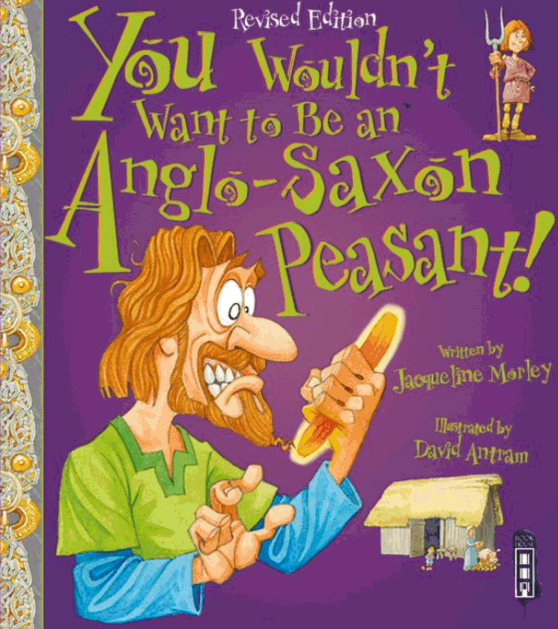 ​"We were very pleased with the consultation services provided by Chris for our children's book, You Wouldn't Want To Be An Anglo-Saxon Peasant. He provided us with thorough, helpful suggestions about how we could improve the historical accuracy of our text and illustrations, whilst always keeping in mind the target audience and the aims of the project. Throughout the process, he remained enthusiastic, punctual, and highly capable."
Nick Price, Salariya Book Company

In summary, I really enjoy helping creative people create and making the inaccessible accessible. So if you have a story to tell based in the Middle Ages, I will help you tell it with confidence, knowing that it's grounded in historical research.

​If you or a team you're heading need a historical advisor, then get in touch and we can talk about your requirements. It doesn't matter what it is, I will either know the answer or know where to find it.

If you need someone to provide the nitty-gritty research for a public history or heritage project, then that's just up my street.

The following are examples of subjects that I have a specialist interest in: social and religious customs; family life; marriage and sexual mores; laws and crime; the Church and monastic culture; pagan beliefs; manuscripts; art and sculpture; dress and grooming; and beliefs about monsters.

I have particular expertise in the culture of early medieval England (c.500-c.1100), though I am always happy to research any facet of medieval life outside this period.

​You can find further information on my current and recent projects here.
Contact me
Other services
I provide professional proofreading and editing services. I'm also available for talks and presentations to historical societies and other special interest groups. So please contact me if you wish to talk over your ideas or discuss your needs.​

"Chris took on work at short notice in a development editor capacity for an academic book project that acquired a new chapter at a late juncture. He provided a sensitive mix of creative input and meticulous editing, ensuring that the project kept moving at a critical stage."
Anna Henderson, co-editor with Gale Owen-Crocker of ​Making Sense of the Bayeux Tapestry: Readings and Reworkings (Manchester University Press, 2016) and formerly Editorial Director, ​​University of Exeter Press

Editorial Services
CREDENTIALS
My PhD was completed at the University of Manchester (2012), where for four years I also lectured on medieval literature, language, art, and culture. I studied under the renowned scholar and dress and textiles expert, Professor Gale Owen-Crocker, whose interdisciplinary approach to understanding the medieval world has influenced my own research and teaching.

I’m the author of the eBook Sodom in the Anglo-Saxon Imagination (Rounded Globe, 2017), an in depth study of how the biblical story of Lot and the Sodomites is navigated across a range of texts from early medieval England, from poetry through personal letters to penitentials; in biblical works by well known writers of the period such as Bede, Alcuin and Ælfric; and in the artwork of the unique Illustrated Hexateuch manuscript.

My study of monsters in early medieval English manuscripts, including the famous Beowulf manuscript, was published in the journal Anglo-Saxon England (vol. 41, 2012), and I recently wrote a chapter on the naked figures in the borders of the Bayeux Tapestry for a collection of Bayeux Tapestry essays published by Manchester University Press.